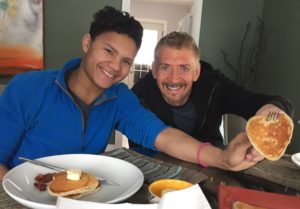 Insights from an Ampersand Parent

In honor of National Adoption Month, we at Ampersand reached out to a couple of parents and asked if they would share their stories of choosing to adopt an older youth. Donald was more than willing to provide insight. His son Tyler moved in March 4 and they are hoping to finalize his adoption in the next year. Below is Donald’s experience with the adoption process and what he learned.

What factors contributed to you deciding to adopt?

I simply wanted to have a family and I particularly wanted to be a Dad.  Like most people, I assumed for a long that I would have a partner and we would have children together.  Well, I didn’t meet the right man and I realized that it didn’t stop me from having a family and being a Dad.  I encourage single men to consider adopting a child if they truly want to be a Dad.

What qualities do you think make good adoptive parents?

There weren’t any actual barriers, only barriers that I put up inside my head.  I thought that adopting would be hard because I’m single or gay or 50.  None of that matters, because single, gay 50 year olds don’t love a child any differently that someone else.

What’s the most inspiring resource you discovered during the adoption process?

Hands down, it’s other adoptive parents!  Find them, have coffee with them, talk to them about what it’s like, ask them for advice.  There is NO better resource than other adoptive parents.  They understand the frustration of the long adoption process, the anxiety of having a new child and all the fears that go along with them.  Other adoptive parents are also the best resource as you move forward with your child, whether it’s around school, behavior, diagnoses, medications, etc…  Seriously, if nothing else, DO THIS!

What’s the most important advice you were given during the adoption process?

Just realize that it’s a very long process.  It’s maddening at times, but you have to just keep breathing and remind yourself that this process is about finding a great family for these kids.  This part isn’t about us as soon-to-be parents and, at times, it doesn’t even seem fair.  But it is fair.  These kids have had strangers ripping them out of homes their whole lives.  This process tries to make sure there is only one move for these kids.  I’d also say to be open to the process.  I had no idea that I would be adopting a 16 year old when I started.  It just turns out that of all the kids in foster care in Minnesota, the kid that I would be the best parent for was 16 years old.   And don’t give up.  Just don’t give up.

What advice can you give someone starting to explore adoption?

Just get started!  If adoption is right for you, then get started.  If, after learning more about the realities of adoption and the difficulties that lie ahead when raising a kid with significant trauma, you decide it’s too much, you can stop the process.  It’s a steep learning curve and, to be frank, you have no idea what adoption is really about until you start.

Are you a potential Ampersand family?

On Language: The origins of the Ampersand

The shape of the character “&” predates the word “ampersand” by more than 1,500 years. In the first century, Roman scribes wrote in cursive, so when they wrote the Latin word “et,” which means “and,” they linked the e and the t. Over time, the combined letters came to signify the word “and” in English as well. Certain versions of the ampersand, like that in the font Caslon, clearly reveal the origin of the shape. The word “ampersand” came many years later when “&” was actually part of the English alphabet. In the early 19th century, school children reciting their ABCs concluded the alphabet with the “&.” It would have been confusing to say “X, Y, Z, and.” Rather, the students said, “and per se and.” “Per se” means “by itself,” so the students were essentially saying, “X, Y, Z, and, by itself, and.” Over time, “and per se and” was slurred together into the word we use today: ampersand. (The Denver Weekly Herald, 4.2012)